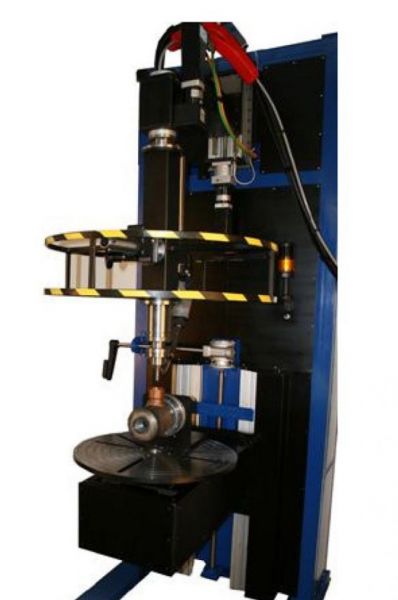 Electronic version of the orbital head with two-axis NC for real-time calculation of the trajectory. With this machine, the operator only has to enter the dimension in millimeters of the base diameter of the horizontal cylinder and the diameter of the vertical nozzle directly on the touch screen. The electronic control calculates the real 3D intersection curve and subsequently stores the mathematical model shown on the display and then drives the two interpolated axes during the execution of the work cycle. The machine in the picture is just an example of the use of this technology for which the rotating head is available in a sliding version on a beam or on a manipulator or in a mobile version like the classic versions.

This solution represents the state of the art in terms of orbital welding on two axes, as it makes the format change extremely simple without intervening with mechanical adjustments on the height difference between the top dead center and the bottom dead center of the welding saddle. Furthermore, once the operator has entered the work parameters, the three-dimensional image of the geometric curve of the welding perimeter is immediately available on the display. Furthermore, during the execution of the welding process, the operator can follow in real time the progress of the welding point on the traced curve. Other functions can be integrated according to the particular needs of the customer or according to the work chain in which the head is inserted.